The more I travel and work internationally, the more I realize what an outrageous blessing it is be a native English speaker.  It is a gift, a powerful gift, that I do not take for granted.  This incredible highly pursued and valuable skill is one that I inherited naturally because I had the fortune to grow up in an English speaking household and in an English speaking country.   This incredible advantage feels very much as if I have a secret key/open door through which I can easily and confidently communicate to the entire world.  I understand the profoundness of this advantage and I am thankful for it every day.

Last week I attended the 5th Annual Nordic academic conference on Subject Teacher Education.  This was a conference that brought together University researchers, professors and doctoral students from Universities in Sweden, Norway, Finland and Denmark.   The purpose was to exchange ideas and promote the development of Nordic education.  The language that was used for this Nordic conference was English.  All of the lectures, Keynote speeches, PowerPoints, printed programs, signs and directions were all in English  Most of the discussions at the dinner table were in English.  There were over 250 different lectures and presentations and all were given in English.   Yet, I was one of only a handful in attendance who’s native language was actually English.

And I was suddenly reminded what an extreme gift and blessing it is to be a native English Speaker.  I could listen to the presentations easily.  I could process the presented information comfortably and rapidly.  I did not have the added challenge of many of my peers who had to translate the technical papers and jargon in their heads while  also trying to also learn and process the new information.  When I sat down to a dinner table full of a combination of Swedes, Finns and Danes I knew that the language of choice would be English.

At times I felt guilty that the entire conference was being led in a language in which I was one of only a handful in attendance could claim as their mother tongue.  This I am learning, however, is the way of the world.  English is becoming the instrument of global communication.  It is especially how European nations communicate to and with each other.

This was not the first time I had been made aware of English’s global presence in the world.  I have been to over 30 countries and I have never had any major difficulties finding directions, advice or even friendly conversation in English.  I have yet to visit a country where I could not find someone who understood at least a little English.  Some parts of China were a little less fluent than others, but I would usually be able to find someone (usually a teen) who could easily answer my questions and help me get back on the right path.

When I was traveling from hostel to hostel in New Zealand, there were times when I found myself listening to random conversations between international travelers.  These groups would included random variations of German, French, Italian and Dutch students and their vehicle of communication was English.   At first I had assumed everyone was politely talking English because I was in the mix.  However I began to notice that even when the native English speaker was not part of the conversation ( Instead she was rudely eavesdropping)  the medium of communication was still English.   Everywhere you go (Even Cambodia!)  information in English is readily available.  If you ask you can usually find an English version of any map, menu or information packet.

My experiences demonstrate to me that English isn’t going anywhere.  It is going to be the way in which nations communicate with each other in the future. Most researchers want their publications to be in English.  Most international companies conduct their business in English, and most international social events and gatherings are conducted in English.  I watched Euro Vision for the first time this year and most of this event was broadcast in English and most of the songs lyrics were English as well.  It can’t be escaped.   It is becoming the language of the world and it is being categorized as “Powerful Knowledge”.

At the conference a few of the keynote speakers alluded to the fact that in Education we must give our students the education skill set that empowers them.  As educators our primary focus should not be mere facts or even arbitrary skills.  Instead we should be selectively teaching Powerful Knowledge Skills that empower students to be leaders and innovators in the world.   English was included in that powerful knowledge skill set.

I feel a little conceited writing all of this as a native English speaker.  It sounds arrogant and elitist of me.  It sounds as if I think my language is the best language.  I DON’T!   English is a dumb language with silly rules!  It makes no sense and is not even very pretty- especially when compared to Latin based languages.   If it was based on beauty or logical structure I think Spanish would win!

It is not that I think English is a better language than any other.  There is however, no denying  that being fluent in English is a Powerful Skill.  It opens doors and possibilities than many languages of the world simply cannot.  Students around the globe want to know and must know how to communicate in English in order to be able to compete globally and advance themselves in their careers.

This isn’t new information to Europe.  Most of the world has known English is important to learn for a long time.  I just wanted to express my understanding of how truly blessed I am to have grown up speaking and knowing this language.   I want every native speaker of English to recognize how fortunate they are to be able to communicate freely and openly with people from around the globe.  That is a gift my friends, an amazing incredible powerful gift and we take it for granted.

I also want to thank all of my wonderful friends around the world who have graciously spoken English to me.  I understand this is not always the easiest for you.  I see all of the hard work and effort you are making to be my friend and communicate with me.  I appreciate your efforts and willingness to speak with me more than you could ever know.  I am always amazed and impressed by your ability to be so articulate, gracious, funny and warm in a language that is not your own.  I am so incredibly blessed and thankful for having you in my life!  You all are incredible and talented and I look up to you in so many ways!  I am impressed and humbled by your skill and I love you all! 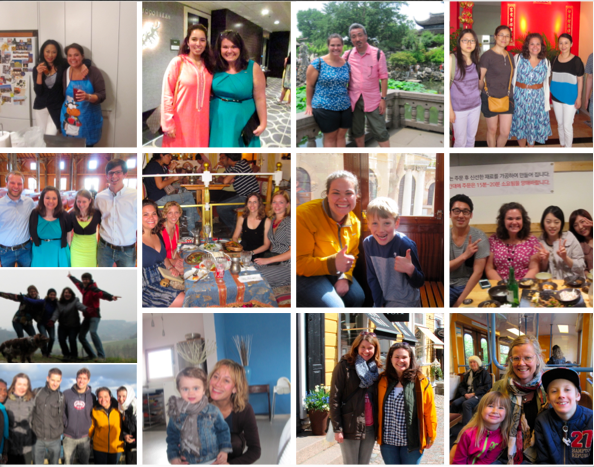 3 thoughts on “English is a Powerful Gift”