Russia.  Just the mention of this country conjures so many emotions, expectations, preconceived notions, and perhaps even some socially conditioned stigmas.   I was born in 1986 and the first years of my life saw the end of the Cold War and with it the literal and figurative crumbling of the Iron Curtain across Europe.  I do not remember ever feeling afraid of Russia as my parents did growing up.  If I am being honest, I really only ever felt sorry for Russia.  I was sorry that Russian people didn’t have the freedoms, advantages and democracy that I had in the US.

I grew up hearing jokes about Russian communism and continually seeing  the Russians cast as the role of bad guys in films.  I learned about the Bolshevik Revolution in school, the tragedy of the murder of the Romanov Royal family, the creation of Marxism and the development into the  communistic control of the USSR.  I was also, like many girls my age, obsessed for a time with the animated movie Anastasia.  This perhaps more than anything gave me the desire at an early age to visit St. Petersburg.  (Cue the song in my head:  “Have you Heard, there’s a Rumor in St. Petersburg” )

I also should note that my travel to Russia in no way supports the recent decisions being made by the Russian government.  Taking over Ukraine is not acceptable and I did debate if I should go to Russia or boycott it on moral grounds.  Perhaps, maybe I should have.  However, I also reasoned that the average person in St. Petersburg, (a city that hates Moscow by the way) is not to be blamed for the corrupt and intolerable decisions of Putin.  Or….perhaps I am selfish and weak and traveling to a historical city is my biggest and most compelling obsession and I should have taken the moral high ground and boycotted but I just didn’t have the self discipline.  The debate is mute now, seeing how I had already given the Russian government their money with the acquisition of my Visa.  Which, by the way I found out has been almost IMPOSSIBLE to receive.  All of the other Americans I have met here in Finland say that NO ONE has been able to get a Visa into Russia.  They were then especially shocked to discover that I not only  had a VISA, but I also had a THREE YEAR multiple entry VISA.  Apparently this is like the holy grail of Visas- and I can come and go out of Russia freely through 2018.  I had no idea it was hard or unusual.  It was an easy process for me, (well, easy relative to the whole Chinese Visa debacle of 2013)  but apparently I got lucky. 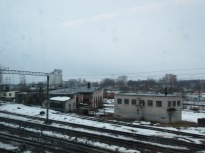 So, this was kind of my perspective of Russia leading up to my visit.  So, when I boarded the train to St. Petersburg last Saturday morning at 6:00 am, I wasn’t sure what to expect.  The countryside didn’t look that different from Finland.  Then we hit the Suburbs of St. Petersburg and I started to get a little nervous.  They were looking a little…ok… a lot run down and what someone growing up with Cold War sentiments might expect of Russia.  I later found out that suburbs in this part of the world are the scary parts of town.  Unlike the US where Suburbs are the safe little havens away from the big city full of stepford wives and shopping malls, the suburbs in Russia (and in Finland too, although not to the same degree as Russia) are where you find the most unemployment, alcoholism and crime.

When the Train stopped I had to check with the others that we were actually in St. Petersburg.  The stop was not in the center of the city and I was a little confused.  It didn’t look like a major metropolitan train stop.  I was sure that we were not in St. Petersburg yet.  However, the kind wonderful woman I met on the train assured me that it was.  I got off the train and the first thing I saw was a crowd of about 20 men holding signs declaring themselves to be taxi drivers and all of them wanted me to choose them.  I found the one closest to me and he took me to my hotel witch was in the city center.  As we drove I started to see more and more of the city I was expecting….and THEN I saw MORE than I was expecting.  The closer we got to the historic part of the city the buildings became bigger, more beautiful, more elaborate and more historic looking.  Every corner became a new discovery and with it was a new monument or statue, a new brightly colored building or church or magnificent Cathedral.

I was blown away and so ready to explore this majestic city.  The Pushka Inn Hotel was perfect.   I HIGHLY recommend it to anyone who finds themselves in St. Petersburg.  It was a fabulous price with helpful and friendly staff.  It was clean and comfortable and beautifully decorated.  However the best part was its location!  It was only about a 5 minute walk away from the Hermitage/ Winter Palace in one direction and about a 7 minute walk to the famous Church of the Savior on Spilled Blood the other direction. 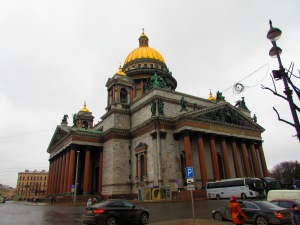 So, I dropped off my Bags and headed for St. Isaac’s Cathedral which was the furthest away location on my itinerary .  I quickly discovered that you could climb the somewhat questionable stairs to the top and get an all encompassing view of the city.  The views from the Top took my breath away.  They were fabulous and I suddenly realized that I had a lot to discover in just one short weekend trip and I might have to return…. thank goodness for a multi-entry Visa!  The skywalk around the top dome of the church was such a fun and unique way to see the city.  I was getting a different and up close look at the statues located up top and an incredible perspective of the city and its winding canals and streets.

Then I entered the cathedral and I was IMMEDIATELY OVERWHELMED….I want to do a separate blog post on this.  I had so many emotions and this post is already long enough.

After an emotional time at St. Isaac’s cathedral I headed towards the Hermitage.  I stopped and got some hot coffee and a quick lunch!  The waitress was so kind and attentive.  She was a young girl and I started to notice two separate reactions to me as an American.  There was the reaction from the older Russians who were not unkind, but not very friendly….ok…maybe a little unwelcoming.   And then there were the younger Russians (anyone my age or younger) that were so friendly and helpful and greeted me with a smile.  I think it was a combination of the fact that those older than thirty can’t speak English have lingering resentment of the Cold War.  While those younger than thirty were obsessed with American culture and American movies.  The young crowd talked about how much they wanted to visit the US and how much they loved American TV and movies. 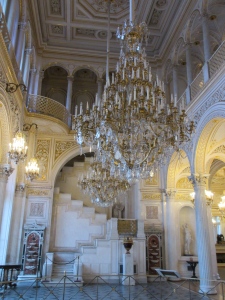 After my coffee pick me up, I visited the Hermitage which was the Winter Palace during Imperial Russia that now exists as one of the worlds largest art museums.   It was rather hetic trying to buy tickets and  I was instantly glad that I decided to do this part of St. Petersburg during low tourist season.  I can’t imagine how busy this gets mid July.  After I finally got a ticket and entered the palace I was just floored by the ornate beauty and grandeur of the place.  Every single room was more grand and opulent than the next.  I can’t even begin to do the place justice with my words.  I spent the entire day with my mouth open in shock and awe at the display of splendor and decadence. I kept imagining Catherine the Great roaming these immense halls.  I visualized the other queens and kings of High Imperial Russia walking up and down the grand stair cases.  I imagined the palatial balls and the luxurious parties and performances held within these royal walls and concert halls. This magnificent palace was built during the height of  Imperial Russia while the infant US was still being formed into a nation. I also suddenly realized the frustration with Imperial Russia leading up to the Rebellion.  The people of Russia were starving and the Czar lived here in a place with so much extravagance it defied words…..It definitely gave me a new perspective into the revolt of 1917. 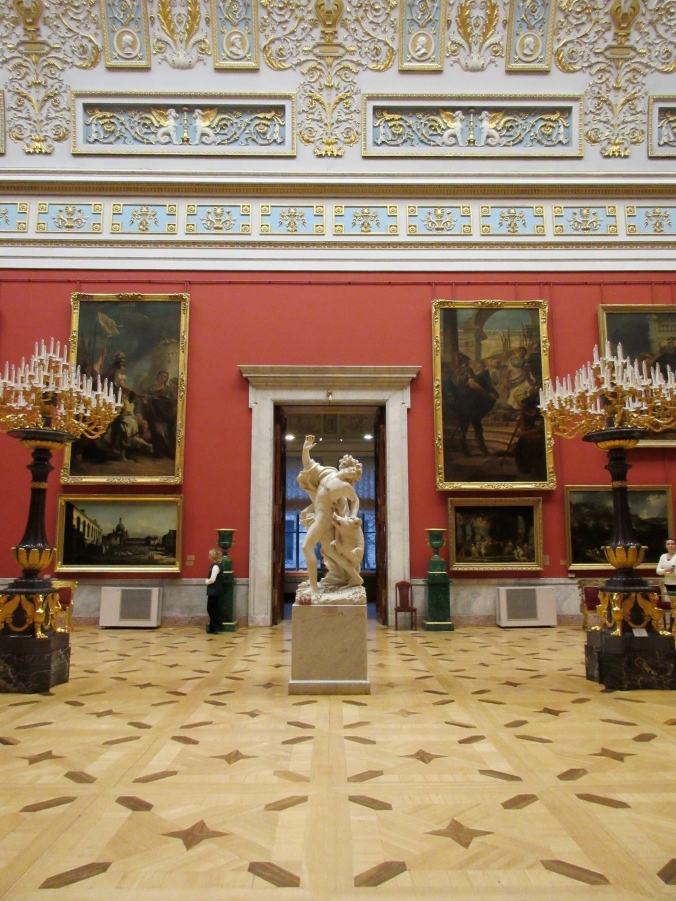 While there might be some truth to objection to the superfluous wealth on display in this palace there is no denying this place was something of extreme beauty and a reflection of Russia’s grand tradition and cultural heritage.   This history and tradition is worth preserving and worth celebrating and Its majestic rooms and halls are definitely worth the trip to St. Petersburg.  You can see the video montage I made of the palace by following the below link. //flipagram.com/f/S9bcW1jVe5/embed

So, while Russia has had a tumultuous and devastating past, I came to realize during this trip that it has also its times of triumphs and prosperity.  A country that can produce the grace and power of the Russian Ballet, that gave the world the Nutcracker,  Swan Lake,  all of the captivating symphonies of Tchaikovsky and Stavinsky  the moving and unforgettable novels of Tolstoy and some truly remarkable and distinctive architectural treasures can’t be all bad.  And while, I may not see eye to eye with its politics or governmental decisions there is no argument that Russia has its own beauty and unique culture that has truly enriched the world. 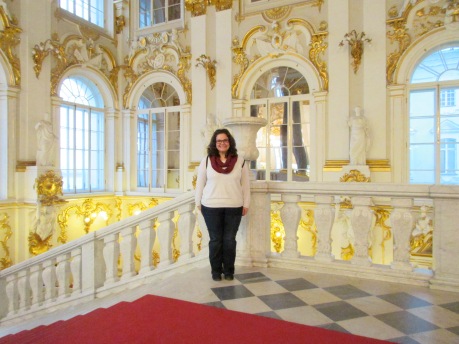