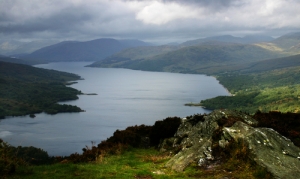 Even after all of my travels I still tell people Scotland was the most beautiful.  I often wonder if this is the “first love” effect.  The loves of my life are my travels and Scotland was my first love.  It was the first international sticker I put on my map and as such will always hold a special place in my heart.   Yet, what isn’t there to love about Scotland?  It has rolling green hills covered with a mystical fog, soul-stirring bagpipes, ethereal lochs, and lets not forget those accents!

The trip to Scotland started with a poster…I was going to my psychology class my freshman year of college when a poster for a class on 19th century British Literature caught my eye.   Believe it or not it was not the content of the class that got my heart all a flutter, but rather WHERE the class was taking place- in ENGLAND and SCOTLAND.  For some reason I had a sudden indescribable passion for 19th century British Literature…  Who Knew?  I wasn’t really sure what the class was about when I signed up for it, but I thought I would figure that out later.  Turns out 19th century British literature covers great authors such as Scotland’s Sir Walter Scott, author of Ivan Hoe and the Bride of Lammermoor, The Bronte Sisters, who wrote Withering Heights and Jane Eyre and many poets like Wordsworth.

So, armed with the background knowledge provided by the novels of Scott, Bronte, and Wordsworth, I set out for Scotland with a group of 20 other IWU students on May 14th 2006.  We landed in London and then took a connecting flight to Glasgow.  We got on a bus and headed north through the indescribable landscape of the Trossachs.  The area was full of mystical rugged mountains, lochs, and forests.  As I sat there staring out the window of the bus, absolutely stunned with the beauty and somber serenity of the scenery, I couldn’t help but think of Sir Walter Scot’s outlawed hero Rob Roy who wondered through these same mystical forests and valleys.

Then we turned into th

e bay of Loch Katrine and I visited my first Loch.   Although this one does not have a monster, it was stunning.  We boarded steamer ship Sir Walter Scott and got a tour of the countryside.  The tour guide told us the loch was so clear that you could drink from it.  So, I decided to do just that.  I leaned down over the edge of the boat cupped up my hands and drank from a loch in Scotland. Even though I almost fell in the water it was the best decision I made that day.  Most people might think that drinking water from a loch on your first day in a foreign country may not be the best decision, but I ask them…can you say that you drank from a loch in Scotland?  I can, it tasted amazing, and I was fine.

We ended the day with a hike around the outskirts of Glasglow that gave us a tremendous view of the city and countryside.  This was my first day in Scotland and I knew I had just fallen in love.

So, on the way out of Transylvania I discovered what can only be described as the castle from Beauty and the Beast.
Today I went skiing In The Carpathian Mountains! It was gorgeous!!! Simply breathtaking! And with the help of my ski instructor I didn’t die! You guys- skiing here is so affordable. The ski lift was 12 bucks. It cost 12 dollars to rent ski equipment and the private lesson was 45.