Berlin- Before May of 2007 I had no plans or any real desire to visit Germany’s capital.  It’s not that I  had anything against it, I just had other cities at the top of my to-go list.  Little did I know that it would be the city that would leave the greatest impact on me in my epic tour across Europe.  You see, that spring I decided to take a class on WWII history.  It was not just any class.  In true “Kelly style” I took one in which I could see for myself the infamous and notable sites of WWII and experience the history and implications of this tragic war.
I didn’t know what to expect of Berlin, but I found it fascinating. Maybe it was because I had been so highly anticipating a visit to Paris (a city that I would later find to be disappointing) that Berlin caught me totally by surprise.   I think more than anything it was interesting to see how far this city had come in such a short time.  In only 62 years, Berlin had overcome complete structural and economic decimation, fascism, communism, foreign occupation, a cold war and a metaphorical and very literal wall of painful segmentation.  Through all of this (albeit self-initiated) destruction, present day democratic Germany has emerged as the thriving economic powerhouse of Europe.  It is the locomotive of the E.U. propelling the collective nations forward into the 21st century.

The modernism of Berlin caught me by surprise.  The city skyline that was destroyed during the bombing raids of WWII has been rebuilt creating a very contemporary metropolis unlike most other German or European cities.  And in the classic German spirit it has been organized to the T.  Everything has its place and is accounted for.  Including the city’s trees!  Leave it to the Germans to be the only nation to literally number every single tree with a little blue tag.   However, when you dig deeper, past the trendy skyscrapers of Potsdamer Square, and the clean (oh so very clean and orderly) sidewalks, you see some of the old scars left behind by the city’s dark past.
This contrast of New and Old Berlin was particularly biting.  A tour through the city was a tour through modern history.   I visited the Old Opera house in Bebelplatz square.  It should be a place to celebrate the fine music, art and literature of Germany but instead it represents the location where the Nazi party burned over 20,000 books in 1933.  As I looked down into empty bookshelves encased in the memorial marking that notorious spot, I felt the lonesomeness of all those vacant shelves pinning for their lost works and ideas.

I also stood on the East side of the Berlin Wall and felt its lingering sting of separation.  I could sense the pain, frustration and tyranny this wall represented.  As I walked along it I imagined myself to be someone living in East Berlin walking home from work, knowing that on the other side of this wall was unattainable liberty, prosperity, democracy, friends and family.  I visited Checkpoint Charlie and heard the stories of the men and women who were so desperate for liberty, a liberty I take for granted more often than I care to admit, that they gave their lives in an attempt to cross a section of land that could be measured in yards, yet was as intangible as crossing the Sahara Dessert.   How could something so close be so very far away?

I walked past the Brandenburg Gate and I imagined it as it was in 1963 when J. F. K. stood in front of the Banner draped doorway.  I wondered what he thought of the scarlet barrier placed there by the Soviets to purposefully prevent him from looking into the Communist East.  I also heard the lingering echo of President Reagan’s 1987 speech pleading for reconciliation.
“General Secretary Gorbachev, if you seek peace, if you seek prosperity for the Soviet Union and Eastern Europe, if you seek liberalization: Come here to this gate! Mr. Gorbachev, open this gate! Mr. Gorbachev, tear down this wall!” Ronald Reagan

And Finally as I effortlessly and peacefully crossed through the gate I could hear the cheers and feel the joyful, tearful elation pouring out of the thousands gathered here on that fateful day in 1989 when the gates were finally opened and Reagan, and the people of Germany, got their wish.  That wall did come down, and Berlin was rebuilt.  But it will forever have scars that no amount of modern buildings can conceal. 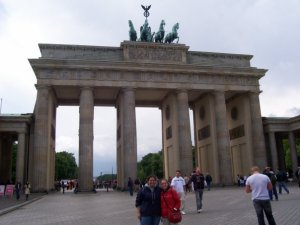 So, on the way out of Transylvania I discovered what can only be described as the castle from Beauty and the Beast.